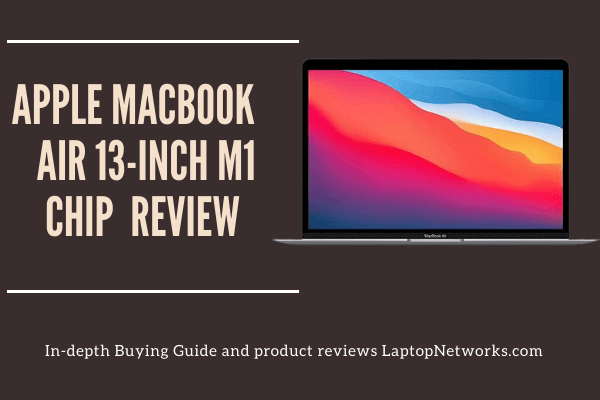 The Apple MacBook Pro with its M1 chip is a revolutionary laptop that packs a punch of performance along with a sleek design. Epitomizing style, grace, and quality, the MacBook PRO M1 remain the best laptop for businesses and daily needs.

“A lot of times people don’t know what they want until you show it to them,” Steve Jobs knew it well, and every new launch by the company strengthens how truly he values his customers. The MacBook Pro 13” M1 speaks for developers’ hardcore enthusiasm behind the product.

Through this write-up, we will bring forth the unique and high-end features of this laptop that make it a top-notch model so far. Futuristic, stylish, and powerful, MacBook Pro M1 bears witness to these superlatives.

Regardless you want to buy a laptop for your commercial or domestic needs; this laptop will cover your back. It encapsulates the most dominant features that one could anticipate from a high-tier brand like Apple.

Let’s read on to know what differentiates this laptop from an array of other models available in the market.

Being a valued customer of Apple’s products, one must have known how intuitive, revolutionary, and powerful all of its gadgets are. MacBook Pro 13″ M1 is not an exemption since it delivers premium-quality performance, most promising power, and a battery life that can last for 18 hours or so.

By thinking “out of the box,” Apple has engineered this laptop just like its other MacBook versions. But this one is superior to other models due to its more advanced features.

Every component under its aluminum chassis is the best in class and performance. The latest MacBook comes with Apple’s M1 technology that features 16 billion transistors on a single ARM-based 5-nanometer chip.

Boosting an 8 core processor, 16-core Neural Engine, 8 GB of unified memory, to run graphics-intensive apps, and games, this MacBook is 2.8 times faster in processing power when compared to the Intel-based MacBook.

Even when put against the standard laptops, this one can outperform 98% of PC laptops. And all credit goes to Apple’s new M1 processor that has increased its CPU, GPU, and Machine Learning (ML) performance.

To top it off, this MacBook bears the longest battery life to date. Once fully charged, this laptop can withstand for up to 20 hours, allowing you to keep working without the hassle of recharging after every 5-6 hours.

To count its numerous benefits, we have done our utmost to break down its essential features.

So, keep on reading to know the most beneficial features of this laptop that make it a product worth considering and worth buying.

Just by taking a single glance at this laptop, you will discover that MacBook Pro 13 M1 is identical to its predecessor_ MacBook Pro 13 Intel. Both share the same design and the same 61-watt USB-C power adapter. Although the Apple M1 version is a few dashes lighter than the previous model, this difference is hardly recognizable by the naked eye.

Available in just two color options: silver and space grey, this laptop weighs just 3.0 pounds. So if you’re expecting a more intuitive design, this one may bring you a bit of disappointment in this regard.

The chassis is made up of aluminum and bears a glossy Apple logo on the lid of the laptop. There are a huge touchpad and a slightly recessed keyboard deck, along with a pair of speaker vents.

Being a MacBook, it remains a classy and the best-looking laptop option for those who never compromise on quality. Ultra-thin and lightweight, this laptop is the go-to choice of many people across the world.

Earlier MacBook versions had a butterfly keyboard that was clingy to work with, but thanks to the new and refined Magic Keyboard of MacBook Pro M1 that has made computing seamless.

All the keys are responsive and execute instantly as soon as you push a certain key. With large keycaps having bright backlit and enough key spacing, the keyboard comes along with this laptop is ultra-smooth.

It bears a 5.1×3.2 inches Force trackpad that comes with an astonishing palm rejection feature. You don’t have to worry about the cursor being moving from one app to another or anywhere on the screen.

A touch-based OLED bar on MacBook Pro 13 has removed the need for functional keys on the keyboard. Just by touching the sensor on the touch bar, you can lock or unlock your Mac. Along with this, it allows you to shop online while saving you from the hassle of entering your card details at the time of billing.

Since it’s a MacBook, you can expect more iconic and revolutionary features like this one from this best-rated laptop.

At first instance, MacBook Pro 13 is identical to its former MacBook Pro 13 version, yet the discrepancy holds when we come to know that both have different processors.

This chip assimilates all the essential internals, including GPU, CPU, I/O, and Apple’s Neural Engine.

This M1 processor is a masterpiece of the most advanced and latest technology ever used by Apple to introduce a more promising laptop to date.

You will not get only get unbeatable performance and light-speed efficiency by using this laptop, but it will make everything quicker and faster. Time is money, and Apple knows it well.

MacBook Pro M1 features an 8-core CPU integrated onto a small chip, known as M1. When calculated CPU performance against its predecessor, the new MacBook never overhauls even during more complex workloads.

Not only this, this powerful CPU processes data at a speed that is 2.8 times faster than the earlier model.

According to Apple, M1’s 8-core Graphical processor is the world’s fastest integrated GPU that delivers 5 times the better graphics performance when compared to older MacBook versions.

The M1 GPU is top-notch since it delivers 2.6 teraflops of performance while executing 25 000 threads simultaneously.

It means that you can not only handle a bundle of image processing tasks, but it gives you more freedom to enjoy playing games with higher frame rates.

So yes, have fun with your favorite gameplay while keeping the integrity of graphics intact with the most advanced GPU of M1.

The MacBook Pro M1 is superior to all MacBook versions that feature an Intel Core processor. Featuring a state-of-the-art 16-core Neural Engine, the M1 is believed to deliver 11 times faster machine learning performance.

Whether it’s automation, scrutinizing, coding, and decoding visuals and vocals, the MacBook Pro M1 stands second to none.

The users of MacBook Pro 13 M1 have gone far to the extent when they claim that it seems as if there is no barrier between the user and execution of instructions. Every single instruction is executed in an instant and has made things snappier.

You can open up as many tabs and apps you want without fearing to face strutting at any time. Thus by minimizing the risk of bogging down at any time, the M1 is a game-changer, and a true miracle laptop one can have.

Smacking its competitors when tested for the efficiency of transcoding a video clip, the MacBook Pro M1 again has won the battle. By executing the task with a cheetah-like speed, MacBook Pro 13 powered by M1 is far ahead of the more advanced Intel Core processor.

So if the outrageous performance of a laptop is what you are lo0king after, then MacBook Pro is a must-have.

The MacBook Pro M1 is a legacy of Apple that outshines all the other premium-reckoning laptops of this century.

Faster, quicker, time-saver, and instantaneous, MacBook Pro13 M1 probes into the depth of a performance that becomes matchless.

The M1 MacBook comes with a standard 8 GB of memory, yet one can go for upgrading its unified memory to 16GB.

The more memory, the more apps, and programs you can have access to.

The 13-inch MacBook Pro holds 256 GB of RAM storage. Yet again, one can go beyond these standards by upgrading the storage to 512GB of Ram.

The preferences and the needs determine which configuration of the MacBook Pro 13 best suits your needs.

We recommend you stick to the standard configuration of this laptop for normal productivity use to get the best out of it.

To make the MacBook one of its kind, the Apple has featured P3 wide color gamut that enables you to have more color spectrum than RGB-optimized laptops. So one can scarcely imagine having a blurred or poor display with MacBook Pro M1.

The colors are lively and vibrant, and the details are so sharp and crisp for demonstrating that Apple has not followed the suit of its competitors.

Opposite to ZenBook, which has 370 nits, the MacBook pro 13 M1 is going way ahead with its 469 nits. So be it your favorite gameplay or watching your favorite series on Netflix, MacBook Pro never leaves you to abandon in dismay or into the world of colorlessness.

Bright, vivid, life-like, the display of this laptop speaks for the company’s sweats.

Brightest Screen Laptops to buy in 2021

MacBook is better than a traditional PC laptop for it is safer against viruses, malware, and spyware.

It doesn’t imply that MacBook would not have a virus at all; well, the chance is absolutely rare.

Not only this, the M1 chip and macOS Big Sur combined will enhance the security and privacy feature on your laptop.

You can ward off apprehension if there’s any since your document and all data on MacBook are secured.

MacBook Pro M1 has a 720p webcam that may not satiate your hunger for having the slaying selfies and videos. Yet when we have tested against the picture quality of the M1 MacBook Pro with Intel MacBook, this one has earned more credits for less noisy and improved image quality for webcamming and zoom video calling.

Not only Macbook Pro has Apple’s advanced image signal processor, but it also has the latest studio-quality speakers to allow you to “be seen. Be heard.

Play your favorite gameplay or a music track and enjoy the finest sound with this laptop. Like older versions of MacBook, the M1 also delivers the same distinctive and dominant sound that is the benchmark of Apple’s stereo speaker.

Approaching its most interesting and unparalleled feature, we have ranked MacBook Pro M1 with a battery life that is the longest-lasting to this date. Its battery can last for up to 20 hours.

If you’re looking for a laptop that can give you hours upon hours of working without getting impeded, then, MacBook Pro M1 outlast all of its competitors.

Intel core MacBook is almost twice less than Apple’s M1 version, even though both share the same battery size and battery capacity.

It is bound to blow users’ minds by enabling you a battery life that can run more than 16 hours. This high battery endurance makes it an obvious reason to buy this laptop over any other laptop models.

This is most interesting to state that, unlike iPhones, MacBook comes at a cost-effective price tag.

You wouldn’t have to sacrifice your arm and leg to buy MacBook Pro 13 M1. The most premium configuration of this MacBook may cost you up to $1,400, while the base M1 powered MacBook is available at approximately $1,200.

From its killer performance to high-endurance battery life, the MacBook Pro M1 is the best laptop one could have ever imagined of investing in.

The decent price tag and the sleek construction are worth remarking features to give a 100% rating. Without overheating during the toughest of tasks, the MacBook Pro M1 flaunts a performance that matches none.

Even though there are some very minor differences that it shares with older MacBook versions, but still class-wise, it’s an imperial laptop choice that worth the price and performance.